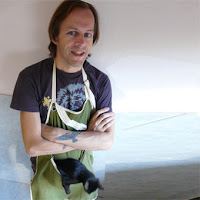 My name is Herwin Walravens, originally from The Netherlands, a tiny west European country with much cheese loving vegetarians, a few hard core vegans, a country with more pigs then people, and the world’s first political party (“Party For The Animals”) to gain parliamentary seats with an agenda focused primarily on animal rights.
I am vegan since around twenty years and before that I was a cheese and milk loving vegetarian. I have been active as an animal rights activist and evolved my street activism into organizing vegan projects. My first project was writing and publishing a very modest pocketguide with all the veggie restaurants in Tokyo, which has grown into a full colour pocketguide covering all veggie restaurants in Japan currently and is in its third edition.
My latest project was a vegan café in Bangkok, which closed the end of last year.
I am now working hard to open a new successful vegan café in Thailand that focuses on attracting non vegetarian people.